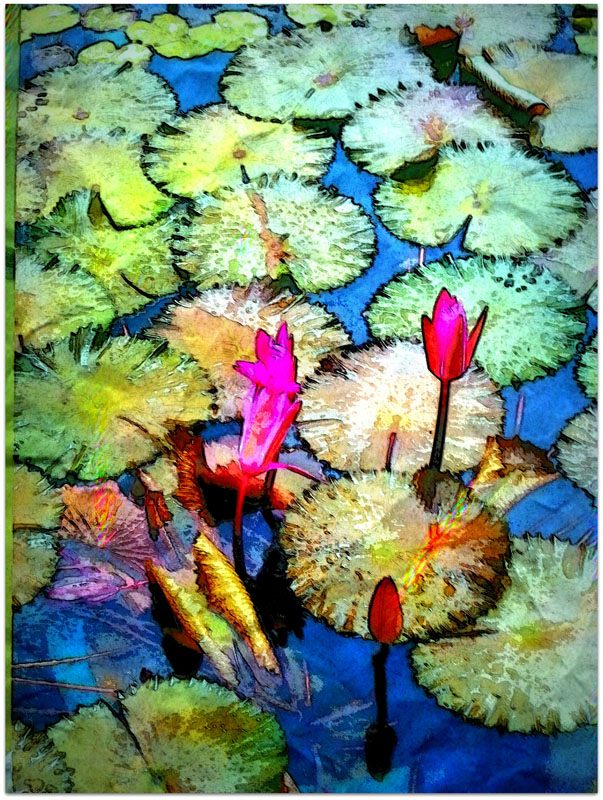 Error: Unable to create directory wp-content/uploads/2022/11. Is its parent directory writable by the server?
Written by Humaira Irfan

Egg tempera technique is a painting technique in which egg yolk is used as
a binder for the color pigment. Water is used as the medium

The attributes of Egg Tempera

Some Famous Egg Tempera artists and their tempera paintings 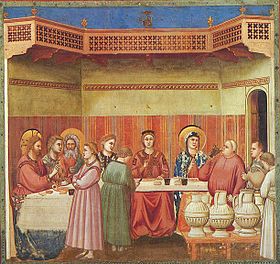 Egg Tempera paints
Many painters prefer to make their own tempera preparing it as required
immediately before use. This removes the problem of storage, and makes the
artist familiar with the material which is an important element of artistic
progress.
Commercially produced temperas ,sold in tubes etc are mostly egg-oil
emulsions based on 19th century recipes, they tend to dry poorly compared to
freshly made paint, also the range is limited and lacks glow; they can also
be greasy and may darken on ageing because of their oil content.

Preparing the surface
The traditional surface for egg tempera is gesso –animal glue mixed with
chalk applied on a wood panel. Cover a plywood panel with this mixture
thickly- smooth it with a sand paper when dried. The surface should be rigid
and not flexible.

Preparing the egg binder
Crack the egg and separate the yolk by passing it from hand to hand .Let the
white fall, dry the yolk by rolling it gently on a piece of cloth or pass it
gently from hand to hand while drying each hand .As the yolk dries, grab it
with the yolk sac, pierce it with a pin, let the yolk flow down in a small
glass jar and discard the sac. Mix a teaspoon of distilled water. Close the
lid of the jar tightly.
Preparing the paint
Make fresh paints each day. Grind a small amount of pigment with distilled
water into a paste. You can add one or two drops of oxgall to tame unruly
pigments .Now grind it with egg yolk, add an equal amount of egg mixture to
the pigment paste, grind it well .you should add one or two drops of water
to the mixture to keep the pigment fluid.
Preparing egg tempera paint with De Mairo Lapis Lazuli pigment /natural
Ultramarine
It is extremely easy to make egg tempera with De Mairo Lapis Lazuli
pigment; it is finely ground without any grit. Unlike other pigments extra
grinding is not needed. Only thorough mixing is required for a few minutes.
You can mix this pigment directly with Egg yolk or if required add a few
drops of distilled water in the egg yolk working it into a paint. Roughly
1 part pigment and 1 part binder is mixed thoroughly to make paint, into a
soft, semi-fluid paste. Add a little more pigment if the paint is too runny,
add more yolk if the paint seems dry.
Off course you can apply and vary tempera painting method according to your
desire and your artistic aims but you should try one painting in the
unsurpassed classical method to appreciate its subtle beauty.
Drawing the sketch 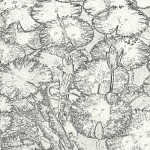 You can make a sketch directly onto the ground or you can transfer already
made drawing on it. You can use charcoal for the drawing because it can be
brushed away with a brush, leaving only a faint image behind.
After that, to describe form, start by a detailed drawing of crosshatched,
and parallel lines as is done in a pencil sketch. Dilute Indian ink on a
fine brush or pencil can be used to fix the drawing. 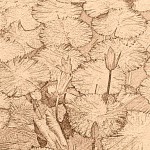 The egg tempera painting starts with the verdaccio under
painting. The verdaccio is a monochrome under painting. For this, use a
small amount black and red earth mixed with egg yolk. The purpose behind
this is to make a neutral brown or olive green (depending upon the painting)
that can be used for shading. Now apply the verdaccio thinly, following the
drawing to indicate areas of shadow varying the tone of the color. Again
various areas are underpainted to build a foundation for further coloring.
For flesh the underpainting is done in green and when pink is applied for
flesh tones, it interacts with the green to make neutral grey thereby
creating shadows having a cool pearly effect in them. Other areas can be
painted in the palest tint of the required color. The underpainting should
be done with little color so that it should not mask the verdaccio shading.
We can proceed with the main painting after that. 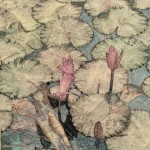 Use De Mairo Lapis pigment for underpainting .Since it’s a gemstone pigment
it is ideally suited for Tempera painting . In the lotus pond painting,
a thin coat of lapis paint is used on the water .For lotus leaves, palest green tint is used.
Here the underpainting is done in hues complementary to those that
are going to be applied later. 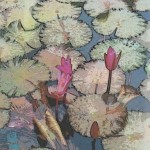 For tempera painting each color should be prepared in three tones:
dark, medium and light by adding white. Be careful not to prepare the colors
for the whole painting as most of them will dry out before they could be
needed. However prepare the colors with their three tonal values as
described above and use them wherever they are required in the painting.
Tempera is done in hatching and cross hatching brush strokes. Hatching is
the application of a systematic pattern of parallel brushstrokes which only
partially cover the ground or paint layer beneath owing to the gaps left
between the brushstrokes .Cross hatching consists of two sets of parallel
brushstrokes which are laid one upon the other in roughly opposite direction
thus allowing less of the underlying colors to show through thereby
increasing the intensity of the color that is being applied .Hatching can be
done in bold strokes also covering a large area but its subtle effect can be
had fully by delicate brush strokes with a small pointed brush. 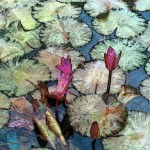 The second stage actually involves a repetition of the first painting, but
this time with smaller brushes and with the tempera paint in a thin and
translucent form. The paint has so far been set down thinly but -solidly
;the next stage is to bring it to a more perfect finish The speed at which
tempera dries dictates the way in which this is done ,since the paint does
not stay wet long enough for it to be blended..With the help of hatching and
cross hatching in thin layers repeat the application until the desired
effect is achieved. In this painting, on the area with water, repeated
hatching and overlaying of the tones of blue with De Mairo Natural
ultramarine have brought the areas of water near to completion.
Towards the end of the painting the richest colors are added.
Finishing 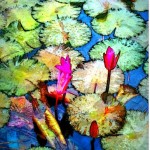 The final stage is to add finishing touches where they are required .Final
accents, if they are necessary, can be drawn in with the brush using pure
color without white. The blue water can be made more prolific and life like
by using pure Lapis paint without any white. Make glowing green by mixing
lapis paint with yellow for lotus leaves. Pronounced highlights can be set
down in pure colors or in lighter shades. Any finer details can be drawn in
over the existing paint using a fine brush and an appropriate color. If the
result is rather flat, forms may need to be brought out by a darkening of
the shadows and a crisping up of outlines .There is a limit, however, to how
dark tempera can be made to look and it is unwise to make the image too
harsh.

Egg tempera dries with a matte finish, which enhances the light bright

quality of the colors .If the dry paint film is lightly buffed with a soft
rag, it will take on a satin –like sheen which some painters regard as
desirable finish .Varnish on tempera should be applied after at least one
year. .Some painters prefer matte and wax varnish on tempera because they are
more in keeping with the paints natural finish.

Error: Unable to create directory wp-content/uploads/2022/11. Is its parent directory writable by the server?